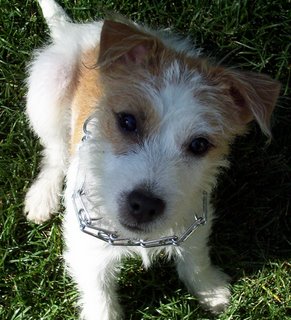 Today Moses learned that he had a bark that he thinks is big dog a bark. So every time sombody passes by he thinks he needs to scare them off. Not that anybody even notices his barking, even though he thinks that he needs to do his “big dog bark”. Moses is a Jack Russell, a little dog who thinks it’s a big dog. Moses is a complete Jack Russell. There is not one thing that would let you believe that he not a complete Jack Russell. He has got the look, the spirit, the likeness of digging, and the bark. Just look at him. Can you tell? Look how innocent he looks. He really isn’t though.

Posted by Kait in Animal Stuff